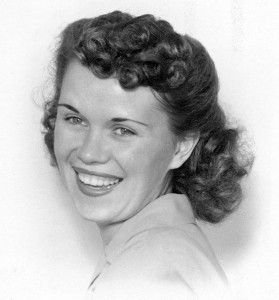 Ruby Marie (Hoover) Mill passed away in Largo, Florida on June 23 after a lengthy illness.
Born in Denver, Colorado on June 4, 1926, Ruby was raised in Greeley and graduated from Greeley High School in 1944. She was the daughter of E. A. “Buzz” and Nora Hoover. Growing up during the Great Depression, Ruby’s early days were nonetheless filled with excitement, as she and her younger brother, “Buzzy” grew up on the grounds of the bustling Greeley Cash Auction Market, owned and operated by Buzz and Nora. She was even known to play the accordion during the Saturday morning amateur radio shows on KFKA radio station, whose programming was dominated by the Greeley Cash Auction Market.
Ruby met her future husband, William J. “Bill” Mill while on a trip to California in 1946. They were married later that year. For a while, the couple lived in Long Beach, California, later moving to a cattle ranch in southwest Nebraska, before finding themselves a true home in McAllen, Texas in 1952 where they operated Hoover’s Paradise Motel—built by Buzz and Nora – for many years. Both were very active in the business and social community in McAllen, where Ruby began what became a life-long membership in Beta Sigma Phi Sorority. Ruby and Bill raised three children: Russell, Roger and Nora Susan.
After Bill Mill’s death in 1969, the motel was sold in the early 70’s and Ruby remarried an old friend from Greeley, Eugene Troupe. They lived for a time in McAllen before moving to Austin, Texas in 1975 and divorcing a few years later. Ruby’s later years were filled with watching her children and grandchildren grow. It gave her great pleasure to be with her grandchildren, and she is fondly remembered for dressing up in her clown costume on many Halloweens to give out candy to the trick-or-treaters. Ruby moved to the Pinellas County, Florida area in the late 90’s. Being an avid sports fan, she loved watching her Tampa Bay Rays.
Ruby’s big smile and radiant spirit will be missed by all who knew her. Ruby was preceded in death by her brother, E.A. “Buzzy” Hoover Jr., her parents, Buzz and Nora Hoover, and her husband, Bill Mill. She is survived by her children, Russell (wife, Christine) and Roger, of Austin, Texas; her daughter, Nora Susan Mill Dunnigan (husband, Tom), of Columbia, South Carolina; grandchildren Jacob Mill of Austin, Shannon Dunnigan of Tallahassee, FL and Sean Dunnigan soon to be from Gainesville, FL; many cousins in the northeast Colorado and southwest Nebraska area.
A celebration of Ruby’s life will be held by family members later this summer as her ashes are spread on the Gulf of Mexico as she requested. The family is asking that any memorials be sent to St. Paul’s United Methodist Church, 1199 Highland Ave, Largo, FL 33770 (www.stpaulumc.org).