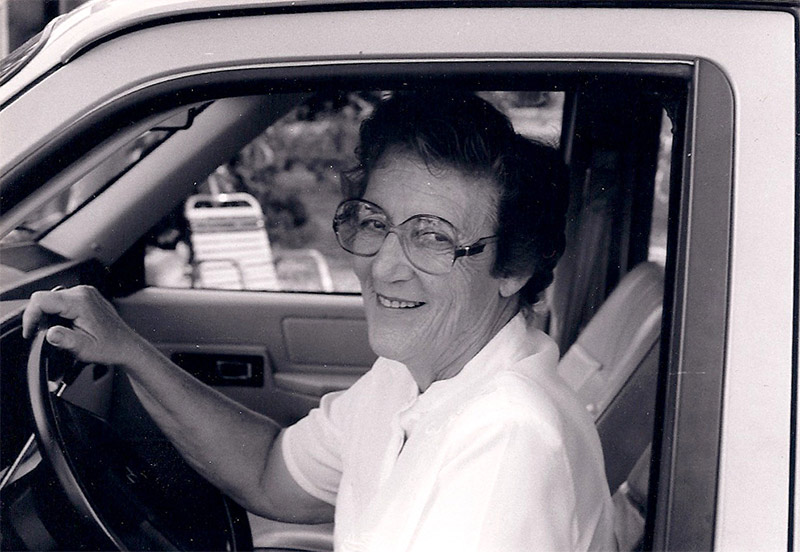 Claire McGaffagan, longtime resident of Indian Rocks Beach, died peacefully on November 3, 2011 with her family at her side. Claire was born on March 14, 1925 in Narberth, Pennsylvania and grew up in Ft. Washington. She was raised by her father, George Bernard Haag and mother, Mary Katherine McGary Haag along with twin brothers Frank and George, her brother Richard and sister, Ruth.
Claire had 4 children, Peter (Mamie), Susan, Mac (Shirley) and Patty (Noel), 6 grandchildren (Alexis, Andy, Christopher, Patrick, Rollie and Paula) and 12 great-grandchildren. She thought of her brother’s children(Richard aka “Dick”) as her own: Rick (Carol), Michael-Paul (Michelle), Chris, Muffy and Steve). She also loved her sister Ruth’s children, Joanie (Harry) and Denny (Sharon).
Claire’s views on life were shaped by growing up during the Great Depression and World War II. She believed that material things were unimportant. She remained interested in politics until the end of her life and was a diehard Democrat. She loved her family above all else. She raised her children as a single parent, often working 3 jobs so they could attend Catholic school. She valued education and was a lifelong learner. She read the paper every day and particularly liked biographies and history. Claire moved to IRB in the 1950’s. She loved the climate and never got accustomed to air-conditioning. In her last years, she lived with Mac in Florida, or with Patty in North Carolina. But her heart was definitely in Florida!
Claire had many jobs and worked until she was 75. She worked for 13 years at Siple’s Garden Seat. While there, she catered many events. She often told of a Passover seder dinner where she served Menachim Begin. She also drove a cab and worked as a Ward Clerk at Suncoast Hospital. Claire started a cleaning business, Kleen and Shyne, when she was 50. Patty, Mac and Susan all worked for her at various times. It was through her business that she met Ling and Terry Frees, who became lifelong friends. Her brother Dick started a hospice at the VA hospital in St. Petersburg. Claire was a volunteer there for many years.
Claire was generous, smart, opinionated and self-reliant. She was truly loved and will be missed by many. Special thanks to Suncoast Hospice and Belinda Robinson, who helped take care of Claire during her illness. A memorial service in Pennsylvania will be held at a later date as Claire’s wish was to have her ashes scattered in Rick’s garden, along with her brother Dick’s.
Memorial contributions may be made to Suncoast Hospice or to the charity of your choice.